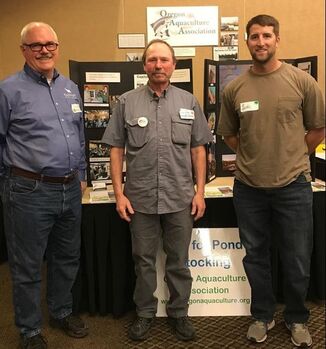 Clint Bentz, OAA President, with aquaculture producers Louis Hans and Luke Fitzpatrick at 2017 Aquaponics Association Conference, Portland
​Oregon Aquaculture Association (OAA) was established in September of 2004 by a small group of producers led by Clint Bentz, Blue Den Ranch. Those involved sold fish for pond stocking and U-Fish catch and release facilities.  Prior to establishment of OAA, and continuing to the present, producers are acknowledged and certified by the Oregon Department of Fish and Wildlife as fish propagators. All transport of fish in Oregon requires a transportation permit issued by Oregon Department of Fish and Wildlife. Regulations are in place to avoid introduction of invasive/exotic fish species and diseases within Oregon.

​In less than six months, OAA introduced four bills to the legislature. OAA managed to pass one bill which ensures that “fish farming” is an outright, rather than conditional use, on land zoned as Exclusive Farm Use (EFU).

​During this time, OAA expanded its networking by co-sponsoring a seafood and fish dinner for Oregon’s legislators. The endeavor was joined by the Oregon Dungeness Crab Commission, Oregon Anglers, Association of Liquor Stores, Mt. Hood Beverage and Pacific Seafood. Audrey McCall, wife of former Governor Tom McCall, and many others enjoyed the fish fry, spearheaded by Desert Springs Trout Farm. During this time, OAA also developed a working relationship with Oregon Department of Fish and Wildlife with goals to address aquaculture issues prioritizing fish health examinations. By January of 2006 the Private Hatchery Committee was created which was based on legislation introduced by OAA during the 2005 session. Committee members were chosen and met several times with Oregon Department of Fish and Wildlife to address fish health management, transportation permits and permitted aquaculture species. 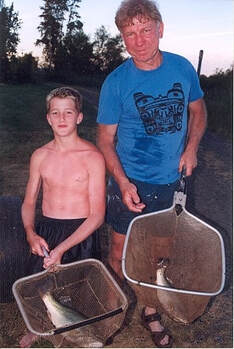 Ken Dunder and Luke Fitzpatrick, Santiam Valley Ranch, 1998
OAA hosted its first “Pond School – Pond 101” which was co-sponsored with Oregon State University Extension Service and held at The Oregon Garden in Silverton. The School focused on regulatory requirements for pond development, issues related to stocking fish in ponds and pond management recommendations. Presentations were shared with 110 attendees who joined the event from throughout the State.​

​By May, OAA was awarded a $9,500 matching grant from USDA Rural Business Enterprise Grant, with co-matching funds provided by The Bridges Foundation ($5,000), Silver Cup ($1,000) and active members of OAA ($3,500). The $19,000 endeavor was to evaluate marketing options and strategies for aquaculture in Oregon. 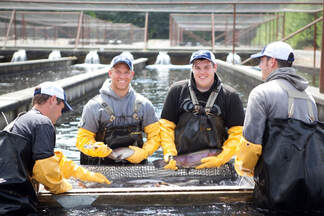 OAA and its fish producers became members of the National Aquaculture Association (NAA) which continues to the present. NAA’s communication and magazine is shared with all members, along with other information which is shared on a continual basis as networking among our members.

​Blue Den Ranch hatchery truck
​Thanks to the support of our members and the USDA Rural Business Enterprise Grant, in 2009 OAA completed this research project on the opportunities and challenges facing the aquaculture industry in Oregon. The results of the business enterprise grant were shared with producers from our consultant, Dr. Ed Schmisseur, “Market Opportunities and Strategies for Oregon’s Freshwater Aquaculture.”  Additionally, a private hatchery working group, an ad-hoc committee set up by Oregon Department of Fish and Wildlife, was formed to address ongoing regulatory issues facing the industry.

​Regrettably, from 2008 to 2012, years were marked by severe economic recession in Oregon. The economic downfall included its aquaculture industry as market demand diminished.  Activities, such as Pond Schools, were put on hold -- it was difficult to sponsor events when many people could not even afford to attend. Throughout this time, most of Oregon’s freshwater producers struggled to continue their operations. Aquaculture, poised on expansion and its association with blossoming collaboration between producers and State agencies, went on hold.

​By 2012, Jerry W. Gardner, Business Development Manager for Oregon Department of Agriculture, Food Innovation Center reinvigorated members of OAA.  Jerry, along with Martin Zone, USDA, Rural Development, were instigators with OAA in pursuing the USDA Rural Business Enterprise Grant in 2006. Not forgetting about the prospects of aquaculture for Oregon’s economic resurgence, Jerry worked with Katy Coby, Director of Oregon Department of Agriculture, and many others to form the Oregon Aquaculture Advisory Group, which continued actively through 2015 at which time Jerry retired. 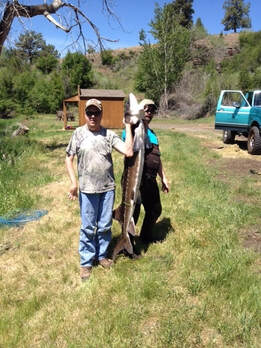 Sturgeon from Prairie Springs Fish Farm
​Oregon Department of Fish and Wildlife, facing their budget after several years of shortfalls, attempted to increase the fish transportation permit from $10 to $40. Efforts by OAA had an immediate impact to reverse these increases in charges, knowing that producers and customers were also recovering from the economic hiatus experience by all.

​By 2016, new products and producers emerged, including production of Dulce seaweed and other products including tilapia, shrimp, sea urchins and growing interest in aquaponics. The prospect of marine aquaculture growing in netted pens on the Continental shelf emerged for discussion, vetted by the commercial fishing industry and its impact of disease and interbreeding with native fish species. The future of marine aquaculture, along with freshwater aquaculture, now directs the new goals for Oregon in collaborating and networking with others to guide these emerging industries.

​2017 welcomes an active participant in the Oregon Aquaculture Advisory Group and an Associate Member of OAA, John Moehl.  John emerged as a leader in advancing efforts to promote aquaculture in Oregon. Most recently, John is forging ahead with Jon Bonkoski, GIS Director, Ecotrust to apply for a 2017 NOAA grant, “Developing a Market-based Aquaculture Program for the State of Oregon.”  If funded, the outcome will promote a sustainable aquaculture market and production research for Oregon.  The $297,028 project will include collaborative partners:  John Moehl, PhD, Aquaculture Specialist, Realized Expectations/AFFIRM; Ann Edwards, PhD, Research Biologist; Oregon Aquaculture Association; Food Innovation Center; Oregon Department of Fish and Wildlife and Oregon Department of Agriculture. Goals are to support the growth of an environmentally responsible aquaculture industry in Oregon. Activities are to compile, assess, and disseminate information about the market demand, cultural adaptations, bio-physical elements, optimal locations, and technical and management practices required for establishing and growing sustainable aquaculture in Oregon. 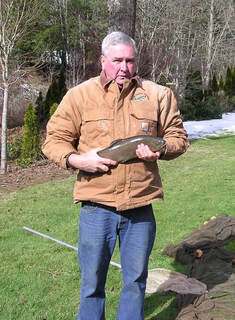 ​Today, OAA continues to reflect the needs of its members. The organization now faces regulatory changes and new funding opportunities. To make sure we retain our ability to operate, OAA needs to grow and become more politically relevant. One initial goal is to raise our membership numbers to at least 30 people/organizations in 2017. To encourage more active involvement, OAA members recently changed their Bylaws to include Groups and School Clubs. ​

Oregon Aquaculture Association should become the go-to group for private aquaculture in Oregon. Only the involvement of Associate Members, Sustaining Members, Student Members, Groups and School Clubs will make this happen coupled with our continuing effort to collaborate with State and federal agencies, schools and universities, and other organizations including business and non-profits. ​

2017 marks new effort to update OAA’s web page, which is loaded with information OAA has developed since 2004 including presentations at Pond Schools, marketing analysis, and Oregon Aquaculture Advisory Committees strategies. Active Members will continue to benefit from weekly advertising in the Capital Press, initiated back in 2004, and all members will be involved with the National Aquaculture Association.